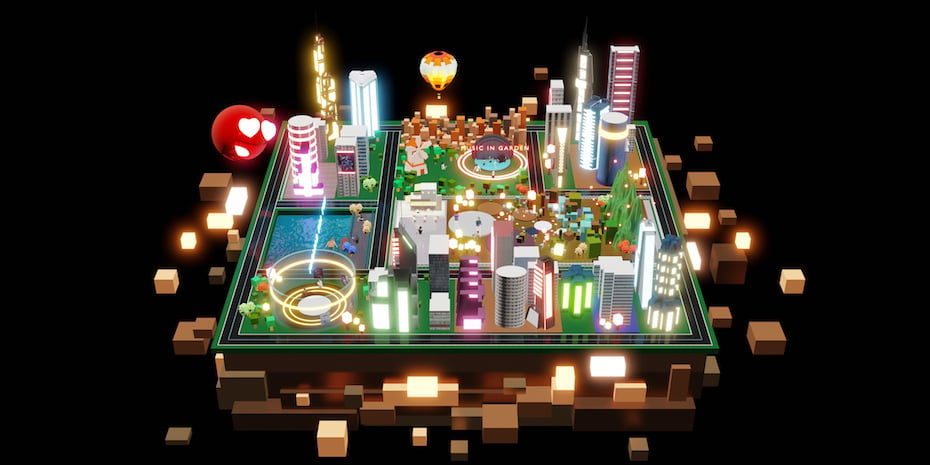 Since the first metaverse offered virtual land for sale in 2017, the concept has been polarising to say the least. Despite over $2bn traded, many question the value of land given its infinite nature, and its role to play in the metaverse.

Why land is a polarising model?
The concept of virtual land has been polarising for various reasons. In the pro camp, supporters believe that land is the equivalent of a three dimensional web domain – a location in the metaverse which has reasons to exist. In the anti camp, detractors believe that the infinite nature of the digital world means that metaverse access should be free for all and land is just an additional way to extract value from users. Additionally, the sharp decline in land prices lately added fuel to the fire, with many investors incurring significant paper losses.

The pro land camp views
So what drives the value of virtual land? Just like any asset, it’s a combination of scarcity, reputation and utility. And although users can teleport in metaverse platforms, location and adjacency still play a major role on the pricing of a parcel. While the number of plots of land can be infinite, like the number of websites on the internet, the audience that visits it is not. Just like in the real world, the audience aggregates around points of interest – the best experiences – that provide value to the virtual land.

As the audience grows, more eyeballs will concentrate on a limited amount of experiences (the best ones), akeen to top YouTubers or Instagram accounts capturing most of the eyeballs of each social platform. So with or without land, this phenomenon will happen naturally anyway. The pro camp just believes that land is the cost of entry to the metaverse, as well as a new investment opportunity. By paying for their land upfront, land owners also control more of the upside by retaining close to 100 per cent of the business generated on the land.

The anti land camp views
The most recurring objections are around artificial scarcity and the infinite nature of the digital world. Some people believe that digital assets (content, experiences, metaverse land, software) should all be free. The anti camp believes that land is an artificial barrier in the development of the metaverse and a way for platforms to ‘cash grab’.

Contrary to the physical world, in a virtual world, one can create additional land by rendering a few extra pixels, so the way platforms limit the supply feels artificial. While that is true, it doesn’t mean it doesn’t create value. Virtually every shop controls the supply of their products to control prices. Diamond mine owner De Beers famously controlled supply of diamond to increase scarcity and increase prices. While it may be seen as a shady tactic, it did contribute to the growth of the diamonds market due to supply and demand.

Why platforms have implemented land?
We see three main reasons why platforms like Sandbox, Decentraland or Somnium Space have embraced the concept of land.

1.Generate early revenue
The obvious reason why platforms implement land is to generate revenue before the platform is launched, which can be used to fund the development. Sandbox has seen $247 million in land sales, Otherside $910 million and Decentraland $282 million. It should be noted these sales were denominated in ETH. Land sales are the platform’s primary revenue stream.

2.Tap into an audience of investors
By selling land, platforms get to target a new audience aside from creators and users. The Land owners are investors who believe in the platform. While becoming a creator on the platform requires skills (such as design or development), becoming a land owner simply requires capital to invest. Data estimates ~150k creators while there are 3m crypto investors. As such, by selling land, platforms can tap into the investor audience.

3.Create fan base
Land owners have invested their money and are financially committed to the growth of the platform. More than creators building on the platform, land owners are shareholders. They act as promoters and evangelists, which creates a strong fan base for the platform.

Imagining a metaverse without land
Instead of breaking the map into land parcels, some metaverse platforms such as Spatial or Journee provide single instance worlds, issued independently. In this model, clients all have their own world, published to the platform but accessible via different links. The downside is that the platform benefits less from network effects, as each world is accessed separately.

There is also a middle ground where the metaverse becomes a publishing platform for experiences. The concept is similar to the current platform with land, except that there wouldn’t be any upfront costs. Instead of having a limited number of…

Sustainable bling: the London jewellers changing the game for…

I-95 interchange in Boca Raton to get ‘diverging…

Concerned About a Recession? Here Are 2 of the Best Dividend…

Should You Buy the Chainlink (LINK) and Polygon (MATIC) Dip or…

Head to LVNA where Drake Dustin is democratizing diamonds