The old gate is still there on the Port Road. Like the house with a plaque on the front of it, the old gate tells its own story.

The house was originally the home of William McKinney back in 1927 and it tells how he made the first Oatfield sweets on a coke fire in the backyard.

The old corrugated gate is now painted blue matching the house but a closer look at it bears the battle scars as a busy hub of business many years ago on the Port Road.

When Oatfield sweets moved to their new factory at the foot of the Port Road, Paddy Tinney moved there to start his business. This is where the late Eddie Tinney was born. 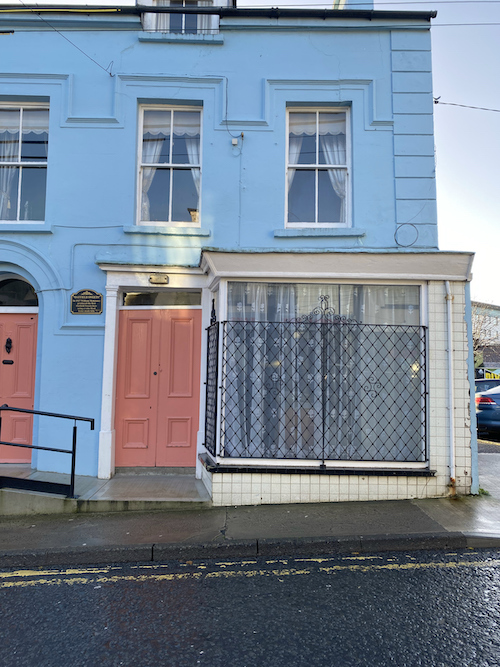 The old shop where you payed for your coal on the Port Road. Photo Brian McDaid. 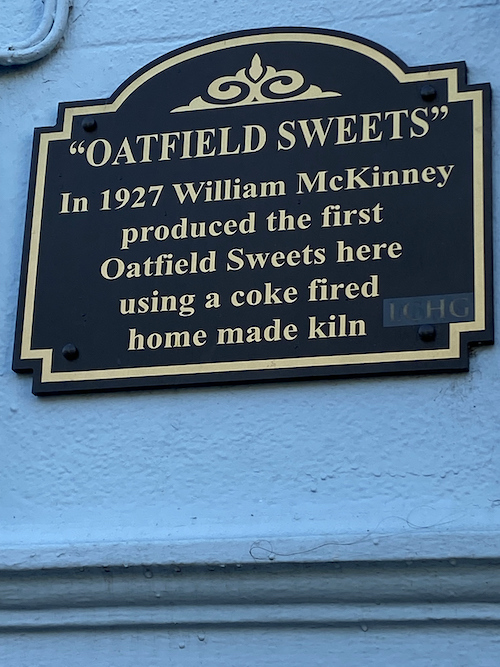 The sign on Eddie’s Childhood home on the Port Road. which was once where Oatfield Sweets originally started. Photo Brian McDaid.

As some of his trucks from their fleet head up the Port Road yesterday leading Eddie funeral they stop outside the shop.

Memories of the old red TK Bedford coal lorry was a familiar sight growing up in Letterkenny. It passed through this old gate many times headed out through tight gables on the Port Rd to deliver coal to all the homes around Letterkenny.

This Wednesday morning, waiting on one of Paddy and Cecelia Tinney’s youngest sons Eddie to make his final journey up the Port Road for the very last time. 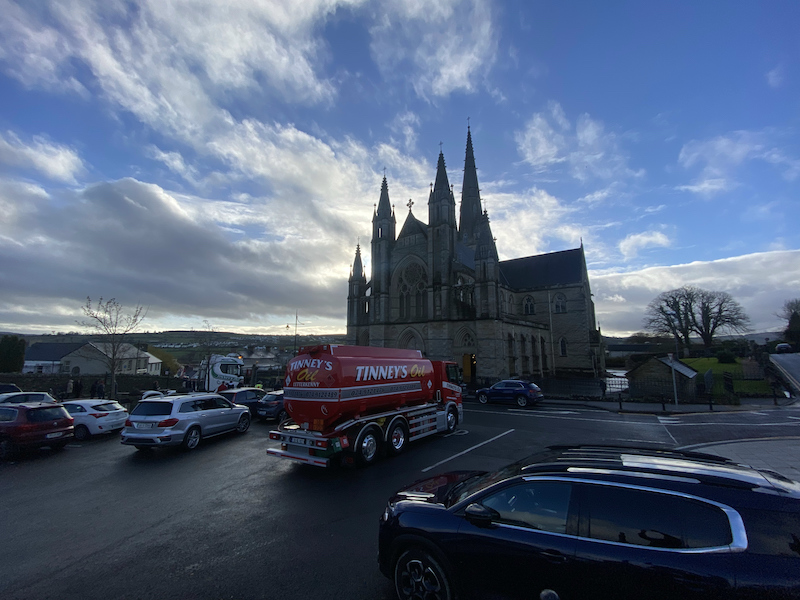 One of Tinney’s Oil Truck waiting at St Eunans Cathedral to take Eddie on his final Journey. Photo Brian McDaid.

I watched the winter sun rising behind the old Tinney home on the Port Road. The wee clothes shop has been closed for a good few years now. Eddie’s sister Margaret and the late Peg Allison worked behind the counter where you could go to pay for the coal delivered to your home.

It would have been Charlie that we would have known first as our coal man delivering to Glencar as children. We were half afraid of him with his face all covered in coal dust as he carried coal into the coal shed in Wolfe Tone and then his brother Eddie was on that run with red coal lorry that carried the name P Tinney and Sons on the cab.

If I was to pick a picture that summed up the late Eddie Tinney it would be the view of him behind the wheel, never missing the ones he knew in the town. Eddie was happiest when he was chatting to people, especially the many generations of families he knew growing up in Letterkenny.

Eddie was one of those people that never would see anyone stuck and many a bag of coal was dropped off to keep a home fire burning in very difficult times.

Fr. Stephen Gorman was the celebrant along with Fr Kevin Gillespie at the funeral mass for Eddie at St Eunans Cathedral on Wednesday morning. 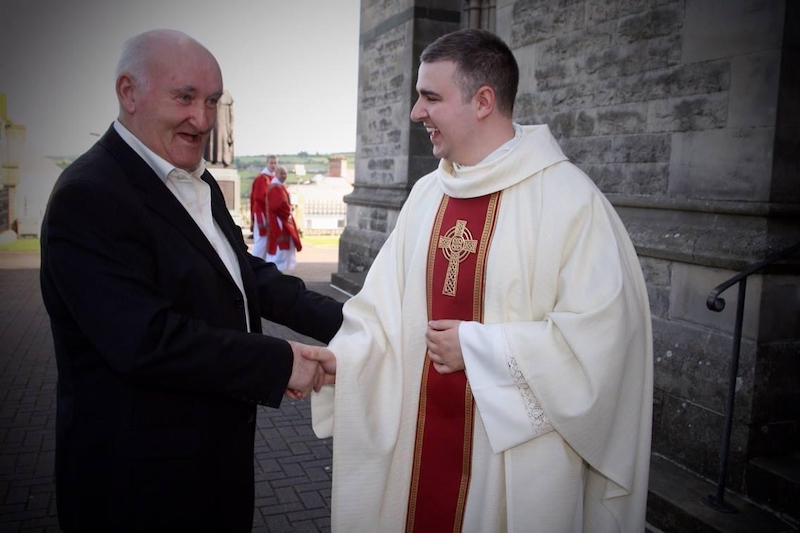 The late Eddie Tinney pictured at the ordination of Fr Stephen Gorman who was former employee at Tinney’s Oil Fr Gorman was the main celebrant at Eddie Funeral along with Fr Gillespie. Photo Brian Mc Daid.

Fr. Gorman was a former employee at Tinney’s Oil and in a packed cathedral he painted a great picture of the kind of person that Eddie was. On behalf of the Tinney family he thanks everyone especially the staff for the support over the years. 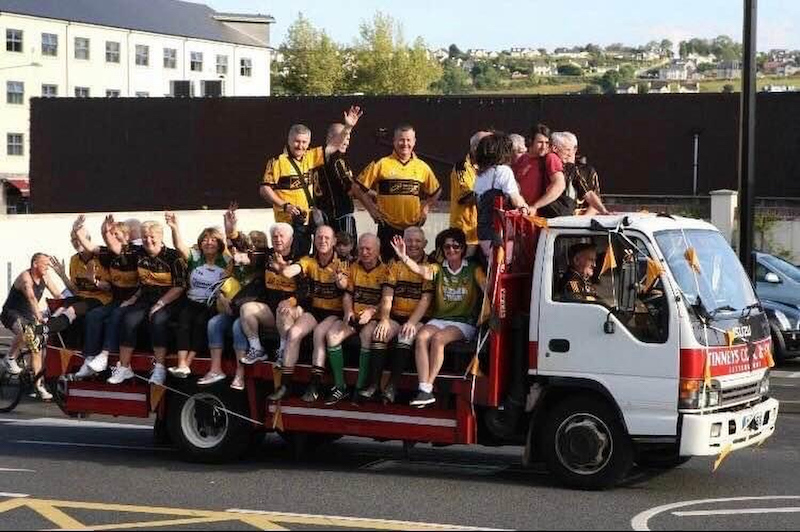 This Wednesday morning two of the fleet of Tinney’s Oil and Transport made their way up the Port Road and stopped for a moment at Eddie’s old family home before the hearse pulled up waiting outside as locals turned out on the Port Road to say farewell to Eddie.

Those two Scania trucks led the way down through the Market Square as their engines idled slowly taking Eddie to his final resting place in Conwal cemetery after his funeral mass. 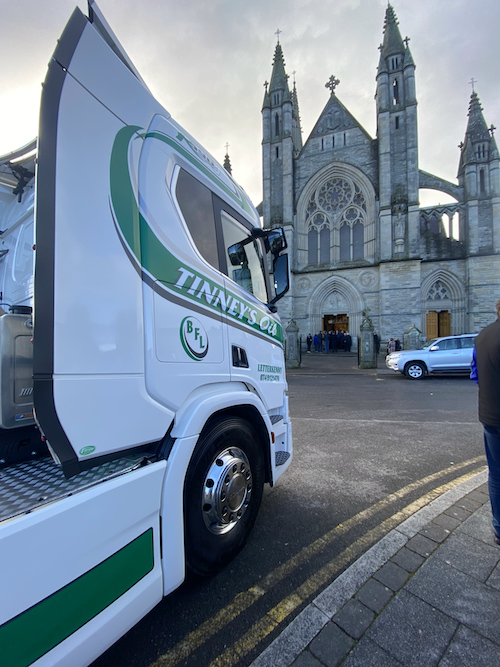 A V8 Scania from Tinneys which lead the funeral of Eddie Tinney’s on his final journey.

More than 80 injured as Indian police clash with Adani port…

Opinion: Shut down coal plants? That’s lights out for us

Young People Want to Farm, But Don’t Have the Land…